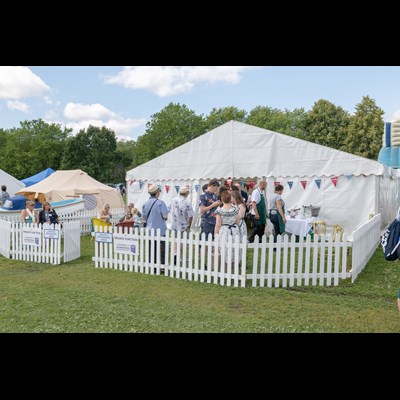 As part of the Shanly Group’s ongoing celebrations for its 50th anniversary, the Trustees of the Shanly Foundation played host to 50 guests from charities that it has supported over the last few years with an informal reception at the Thames Traditional Boat Rally in Henley-on-Thames on Saturday 20th July. Charities included Riverside Boat Trust, Trailblazers (young offenders support), SATRO (mobile construction classrooms), Thames Hospice and more.

To say thank you for the work they do, attendees, along with their families, were treated to a buffet lunch with a fantastic viewpoint of the Gloriana, The Queen’s Rowbarge specially constructed for the Diamond Jubilee in 2012. This was followed by a boat trip aboard the Alaska, a Victorian passenger steamer which is the oldest boat of its type still in regular service.

Following a speech from Tamra Booth, Trustee of the Shanly Foundation, Thames Valley Adventure Playground presented the Trustees with a sculpture, made by some of the children who use the playground, as a thank you for the Foundation’s support over the past 30 years.

Tamra Booth said: “Being able to bring so many people together in celebration of the hard work these charities do is wonderful. The Thames Traditional Boat Rally is always a local favourite and so was an obvious choice to attend with our guests of honour, who do so much for the local community, and we hope that everyone had a lot of fun.”