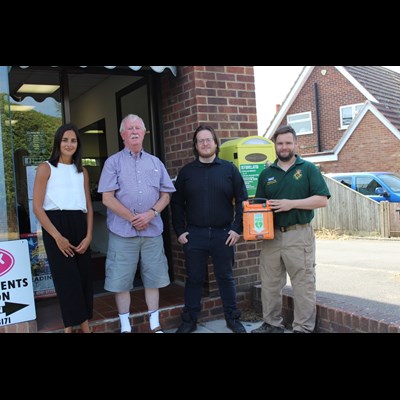 A new life-saving defibrillator has been installed in Twyford after a local community group launched a campaign to replace one of the devices that was stolen from the village last year.  Twyford Together received funding from the Shanly Foundation who heard about the theft in the Maidenhead Advertiser and wanted to help the village re-build its defibrillator network.

As a volunteer-led organisation that works to support the Twyford community, part of Twyford Together’s role has been to build a defibrillator network for the village in partnership with Wargrave and Twyford Community First Responders; a group of local volunteers managed and despatched by South Central Ambulance Service to respond to 999 calls in the community,

The new defibrillator has been installed outside Stylistix hairdressers on Longfield Road in Twyford and was unveiled by Gordon Storey from Twyford Together, Neil Robertson from Wargrave and Twyford community first responders and Zoe Jones from the Shanly Foundation.

Gordon said: “We are delighted to be working with Wargrave and Twyford CFR and have helped them to install and maintain a network of eight defibrillators. When one was stolen late last year, we were very pleased that the Shanly Foundation was kind enough to pay for a replacement. The local community rallied round too, and crowd funding helped raise £2,000.

“All this money has enabled us to install the eighth defibrillator in Longfield Road. It was wonderful to have been recognised by the Shanly Foundation for our efforts and their contribution of £800 is greatly appreciated.”

Neil Robertson, a scheme coordinator at Wargrave and Twyford Community First Responders said: “Living locally, we can be in a position to arrive quickly to the most serious of calls, such as cardiac arrests, and deliver potentially life-saving interventions where time is critical. We work on a rota and each member contributes around 20 hours per month ‘on call’. We are despatched at the same time as a regular Ambulance and carry several pieces of equipment, including a defibrillator and oxygen. These are life-saving devices that can be used by any member of the public during the critical moments following a cardiac arrest”

Maria Mindak, awards officer at the Shanly Foundation, commented: “The Foundation is committed to supporting local community groups, charities and organisations in the places where our businesses operate and when we read about the work Twyford Together was doing for the village we wanted to show our support. We hope the new defibrillator will reassure locals that they are fully covered in the case of an emergency.”

The Wargrave & Twyford CFR group is actively seeking new members in the RG10 area to join their team. Full training is provided by SCAS, with CFRs undergoing regular refreshers to maintain their skills. People from all walks of life become CFRs and a medical background is not necessary. To find out more, head over to www.scas.nhs.uk/our-services/community-and-co-responders, call 0800 587 0207 or email cfr@scas.nhs.uk.

For more information on Twyford Together visit www.twyfordtogether.org