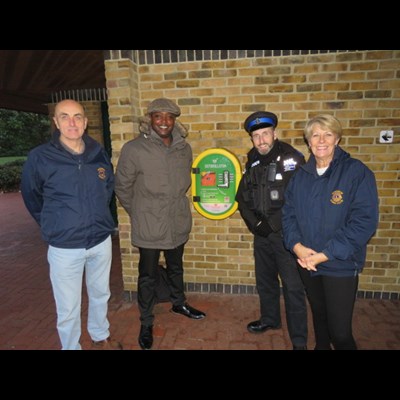 The Windsor Community Defibrillator Partnership has received funding from the Shanly Foundation to install three new life-saving defibrillators. Two have already been purchased, with one installed in Bachelor’s Acre, Windsor and the second due to be placed near the bridge between Eton and Windsor. The third will be purchased shortly.

Defibrillators are life-saving devices which, if used within 3 minutes of a cardiac arrest, give a 70% chance of survival. Without one, after 10 minutes, the chances of survival are minimal. This highlights just how vitally important the Partnership’s work is to the local community’s safety.

The Partnership was set up in November 2016 by a small group of representatives from Windsor Rotary Clubs, Windsor Lions, Royal Borough of Windsor and Maidenhead and the Thames Valley Police. They recognised the importance of defibrillators in the event of a cardiac arrest and, realising that central Windsor did not have any publicly accessible 24 hours a day, decided to do something about it.

Michael Sells, member of the Partnership, comments: “Chances of survival increase significantly with early access to CPR (cardiopulmonary resuscitation) and defibrillation. We continue to raise funds to enable these life-saving defibrillators to be installed in the areas surrounding Windsor Town Centre and are very grateful for the fantastic support we have received from the Shanly Foundation.”

To date, seven defibrillators have been installed, with another two devices purchased and initial indication of possible funding for four more around for the town. In addition to supplying more defibrillators, the Partnership are also training local business staff and residents to use the equipment and perform CPR.

Tamra Booth, trustee of the Shanly Foundation comments: “Ensuring that people are trained in CPR and have access to defibrillators is a vital community service.  This Partnership is an organisation that we are proud to support. It is great to see that the defibrillator in Batchelor’s Acre has now been installed and we look forward to the next two devices being available to the residents of Windsor.”