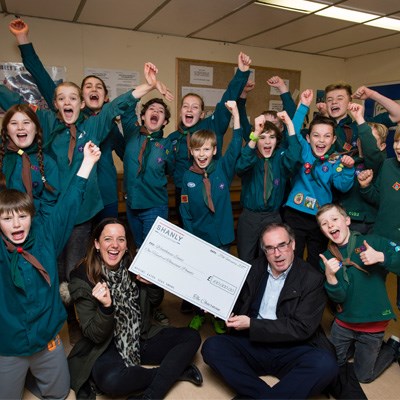 "Building Futures" for Scouts across the UK

As a long term supporter of Scout Groups, the Shanly Foundation launched an exciting competition in September 2016 to give Scout troops nationwide the opportunity to win £100,000 to build their dream hut.  There were also a further five £10,000 prizes for repairing existing huts as well as six £5,000 prizes to put towards equipment an activities.

The response from Scout Groups across the country was fantastic and with so many worthwhile applicants it was a hard task for the judges, made up of Shanly Foundation Trustees and representatives from the Scouting Association to decide which troop were most in need.  The trustees of the Foundation were most impressed by the high level of input the scouts themselves had invested in designing their dream hut and how creative they had been with their entries.

We videoed the moment the overall winner of the competition, Woodhouse Eaves based in Loughborough, received the news that they had won.

Woodhouse Eaves has been without a permanent meeting place for two years after their hut behind the village hall became so dilapidated that it was demolished. The group’s leaders have been working tirelessly to ensure that each week the 120 Beavers, Cubs and Scouts are still able to hold their meetings in various community centres, hired rooms, garages and parents’ outbuildings.

Their submission not only tugged on the heartstrings of the judges but impressed them with their sustainable and realistic designs which included a climbing wall and campfire area.

The other competition winners were: